More and more Swedish readers find and love your books. And your titles have been translated into 27 languages. For what reasons do you think your books attracts readers from so many places around the world?

– I’m thrilled that Swedish readers are discovering my books! That my books have been translated to 27 languages is so far beyond any of my expectations! I couldn’t be more delighted, and I have no idea what has led to this success — why the books are finding homes and readers in so many other places. I like to think it’s because they can transport you to another place for a while — this is something readers often tell me. I also always try to write a story that intrigues readers from very early on, so that they have to keep reading on to find out the truth…

Eight of your titles have been translated into Swedish so far. In your novels you constantly explore new places and new eras, is this out of curiosity or something else? How come you dig in the past?

– This is one of the most fun things about writing historical settings! I can pick and choose different times or places that interest me, find out about them, and then write about them! It is purely out of curiosity – for me, the research is the most fun part. I’ve always been fascinated by history, even from a very young age. I loved ruined castles and stories about medieval times when I was little, and then I went on to study history at university.

– I don’t know where the fascination stems from, but it seems it will always be with me. Perhaps it’s the different rules people had to live their lives by in the past, or the fact that it often seems like a simpler time — no climate change, no international terrorism, no Trump. But, of course, in the past you could die from a cut on your hand, or in childbirth; there was no such thing as gender equality or social mobility, and the vast majority of people lived and died in poverty… So it’s important not to have too rose-tinted a view of history!

Your last novel that has been released in Sweden, Spåren efter dig, takes place in Somerset, England during the Second World War. During a bombing night in Bath a six year old boy disappears, and Frances, who bears responsibility for him, suffers severe pain of conscience. The day after a body is found. But it is the body of another child, namely the girl who went missing over twenty years ago … How did you came up with the fascinating intrigue for this book? Is it based on some real events?

– The crime I describe in this book was partly inspired by a real life miscarriage of justice, which I found out about by chance when I was visiting Melbourne, Australia. In 1922, a Melbourne man called Colin Ross was hanged for the murder of a little girl. He was a local ‘bad boy’ — a bit of a small-time criminal. The police were under huge pressure to solve the murder, and they decided early on that Ross was the killer, and pursued him to the end. It was only recently that a forensic journalist looked at the case again, and proved that Ross was innocent — he was granted a full judicial pardon in 2008.

– I was really struck by this case — this terrible miscarriage of justice: An innocent man was hanged and a child killer was allowed to walk free. I used this idea when I was working on my story with my characters. Also, I’d wanted to write a story set in the aftermath of the bombings in Bath, which not too many people in the UK know about. The raids had been totally unexpected, and caused a huge amount of chaos. It would have been — sadly — so easy to lose a child in such chaos…

Tell us a bit about yourself! Where do you live and what do you do when you are not writing?

– I live in an old house which I spent a long time renovating, in a small village near Bath, in the south west of England. It’s peaceful and cosy — perfect for writing. I don’t have any crazy hobbies. When I’m not working I love hiking, cooking, reading, seeing friends, and travelling as well. My partner and I like to go camping in wild places — but only in the summer… I also watch endless Detective programs on TV!

What writers are you inspired by?

– I read all sorts of books, all of the time, so it would be difficult to pick out particular writers who inspire me. There are so many. Quite often I read a book that’s so beautifully written, and so gripping, that in fact I despair! But I remember first reading Rebecca by Daphne da Maurier when I was about thirteen, and being absolutely stunned by it — amazed by the twist, and the power of the writing. I also loved Tolkien, and the way he can could transport me to a completely different world. So perhaps these were my early influences…

By the end of August you will visit Sweden! Among other things you will take part in the Feelgood festival in Mariefred. Have you ever read any novel by a Swedish writer? And what would you like to say to your Swedish readers?

– I have read some Swedish writers, yes — though, I confess, not as many a I should have. I was lucky enough to meet Johan Theorin a few years ago, on a book tour, and since then I have read several of his crime novels — they’re excellent! I’ve also read some Henning Mankell…I think most people in the UK have! I also recently read A Man Called Ove by Fredrik Backman, and I really enjoyed it.

– To my Swedish readers I would like to say, hello and thank you! Thank you so much for reading my books — I can’t wait to meet some of you this summer at the Feelgood festival! 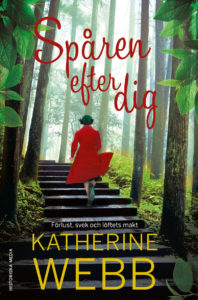